Only 13 of the $20 gold coins are known to exist today and U.S. Secret Service agents have pursued the coins for over 60 years to take them out of circulation

The rare 1933 $20 Double Eagle is the most expensive gold coin ever to be sold at auction which sold for $7.6million at Sotheby's in 2002 - will be exhibited in the UK.
Nearly half a million of the gold coins were minted in the U.S. in 1933 in the midst of the Great Depression but only 13 are known to exist today.

The rest of the coins, featuring an eagle on one side and Liberty on the other, were melted down before they ever left the United States Mint.
Only one coin is legally in private hands, with all other 1933 Double Eagles remaining as property of the U.S. government. 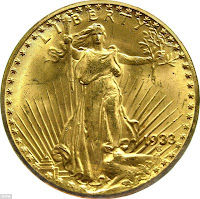