SPIKE TV announced that a new show would air on March 21st 10:00 PM, 9:00 Central- called ‘American Digger’ Since the annoucement there has been a fair amount of negative sentiment growing against this TV program. For example archaeologyfieldwork.com  said “New TV show encourages treasure hunting in battlefields and historic sites”  and has posted a link to a petition against it. http://www.change.org/petitions/stop-spike-tv-from-looting-our-collective-past.

Will all Metal Detecting hobbyists be portrayed in the same light?
An online video clip (link below) of the new show illustrates the nature of their work. While it may seem entertaining to some, it may not convey the image of the average metal detectorist.  Most of us do not go around with backhoes, pick axe and large shovels digging gigantic holes in the ground and throwing dirt all around. One video promo shows them using explosives.
So the next time you go seeking permission to dig on someones property, don't be surprised if they turn you down, especially if they have seen this show.
http://mtvnmobile.vo.llnwd.net/kip0/_pxn=1+_pxI0=Ripod-h264+_pxL0=undefined+_pxM0=+_pxK=18639+_pxE=mp4/44620/mtvnorigin/gsp.spike-assets/spikecomstor/media/shows/digger/s01/promos/SPHD6339-01_384x216_150_b30.mp4?spikeshows 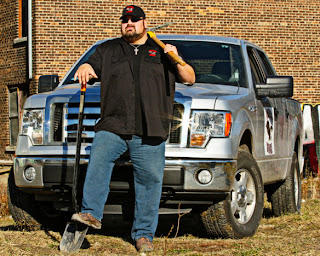 
Email us your comments:
deepsearchmetaldetectingclub@gmail.com


Here is just part of the announcement released by SPIKE TV regarding the show. You can read the rest of the piece by clicking on the link below.
New York, NY, February 15, 2012 – Spike TV ventures around the country in search of historical treasure buried in the backyards of unsuspecting citizens in the new unscripted original series, “American Digger.” Premiering Tuesday, March 20 at 10:00 PM, ET/PT, “American Digger” follows the American Savage team, led by former professional wrestler-turned-modern- day relic hunter Ric Savage as they scour target-rich areas, such as battlefields and historic sites, in hopes of striking it rich by unearthing and selling rare pieces of American history.
In the US, there are millions of historical relics buried in backyards just waiting to be discovered and turned into profit. “American Digger” hopes to claim a piece of that pie as the series travels to a different city each week, including Detroit, MI, Brooklyn, NY, Chicago, IL and Jamestown, VA searching for high-value artifacts and relics, some of which have been untouched for centuries. After pinpointing historical locations such as Civil War and Revolutionary War battlefields, Savage’s first task is to convince reluctant homeowners to let his team dig up their property using state-of-the-art metal detectors and heavy-duty excavation equipment. The team will then sell any artifacts found for a substantial profit by consulting experts and scouring the antique and collectible markets, but not before negotiating a deal to divide the revenue with the property owners.
Throughout the series, items with great historical and cultural significance will be found, including a late 17th century British Carronade naval cannon, a 5 million year old Megalodon shark’s tooth and a 19th century Kentucky long rifle.
American Savage, based in Mechanicsville, VA, is the top artifact recovery company in the country, digging as much as half a million dollars worth of historical artifacts out of US soil each year. The team is comprised of recovery expert Rue Shumate, battlefield historian Bob Buttafuso, Savage’s wife Rita who manages the business and their 25-year old son Giuseppe, who provides tech support and is the “muscle” of the operation.