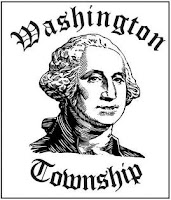 Diggers Beware- Relic hunting and metal detecting are now prohibited in Washington Township parks.  Last week, township supervisors unanimously approved the rule change for multiple parks, including Red Run Park, Antietam Meadow Park, Bailey’s Run Recreation Area and Happel’s Meadow Wetlands.
Relic hunting and metal detecting were already prohibited at Monterey Pass Battlefield.         The rule states that relic hunting and metal detecting are prohibited except when written permission is given by the chairman or the board of supervisors.
Michael Christopher, township manager, noted he wanted to make the rule consistent for all the parks.
“We had a situation two weeks ago, where people were digging in Happel’s Meadow,” said Christopher, who believes they were most likely looking for Civil War relics. “At that time we had no provision to stop the activity.”
http://www.therecordherald.com/article/20130426/NEWS/130429886
at 6:22 PM No comments: 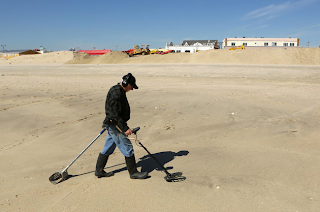 I am aware of several beach hunters that have been chased off beaches by Police since  many towns are still trying to rebuild the boardwalks and main avenues along their beaches.
It is in everyone's best interest not to get in the way of efforts of restoring the shore. If tourists don't come we will have noting to find.
Also be sure to support the local stores in and around the boardwalks. http://www.nj.com/ocean/index.ssf/2013/04/sandy_metal_detecting_new_jersey_beaches.html
at 6:06 PM No comments: 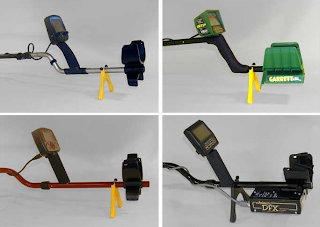 Like many of us when we are out detecting we invariably lay our detector on the ground at some point, then it falls over and gets dirty.
Well they have a gadget for everything I guess.
< Kellyco sells the Anderson metal detector stand for $14.99 ea. and they come in four different colors. (black, blue, red & yellow) You have to check and make sure they will fit your detector.
http://www.kellycodetectors.com/accessories/anderson_shafts.htm?utm_source=googleshopping&utm_medium=sce&zmam=97952566&zmas=1&zmac=27&zmap=1429-0917&zmam=97952566&zmas=1&zmac=1&zmap=1429-0917&gclid=CLXJ-J3e5rYCFcdU4AodsV8APg 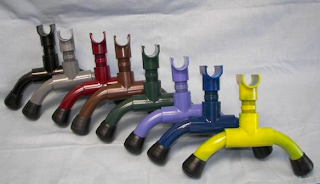 Then we have stands made by 'Indian Nations Detectors' which sell for $21.95 shipping included. Again you have to check and make sure they will fit your detector.
http://www.indiannationsdetectors.com/stands.html

If you are the Do-It-Yourself type. You can make your own. See how by watching this video http://www.youtube.com/watch?v=d1ohHUGkTpI 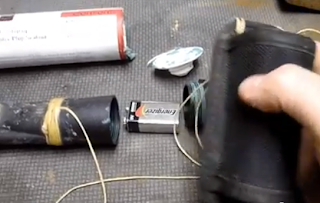 Watched this video about how to "waterproof " a Garrett pin pointer. In the process video shows a really neat idea about attaching a lanyard from pin pointer to holster. Makes it hard to forget your pin pointer on the ground. Wish Garrett would adopt something like this for their pin pointer.

1913 Liberty head nickel once declared a fake. Now recognized as authentic, expected to fetch $2 million to $5 million at auction.

A 5-cent coin with a storied past is headed to auction and bidding is expected to top $2 million a century after it was mysteriously minted.

The 1913 Liberty Head nickel is one of only five known to exist, but it's the coin's back story that adds to its cachet: It was surreptitiously and illegally cast, discovered in a car wreck that killed its owner, declared a fake, forgotten in a closet for decades and then found to be the real deal.
It is expected to fetch $2.5 million or more when it goes on the auction block April 25 in suburban Chicago.
The sellers who will split the money equally are four Virginia siblings who never let the coin slip from their hands, even when it was deemed a fake.
The nickel made its debut in a most unusual way. It was struck at the Philadelphia mint in late 1912, the final year of its issue, but with the year 1913 cast on its face — the same year the beloved Buffalo Head nickel was introduced.
Mudd said a mint worker named Samuel W. Brown is suspected of producing the coin and altering the die to add the bogus date.
The coins' existence wasn't known until Brown offered them for sale at the American Numismatic Association Convention in Chicago in 1920, beyond the statute of limitations. The five remained together under various owners until the set was broken up in 1942.
A North Carolina collector, George O. Walton, purchased one of the coins in the mid-1940s for a reported $3,750. The coin was with him when he was killed in a car crash on March 9, 1962, and it was found among hundreds of coins scattered at the crash site.
One of Walton's heirs, his sister, Melva Givens of Salem, Va., was given the 1913 Liberty nickel after experts declared the coin a fake because of suspicions the date had been altered. The flaw probably happened because of Brown's imprecise work casting the planchet — the copper and nickel blank disc used to create the coin.
Melva Givens put the coin in an envelope and stuck it in a closet, where it stayed for the next 30 years until her death in 1992.
The coin caught the curiosity of Cheryl Myers' brother, Ryan Givens, the executor of his mother's estate. "He'd take it out and look at it for long periods of time," she said.
Givens said a family attorney had heard of the famous 1913 Liberty nickels and asked if he could see the Walton coin. "He looked at it and he told me he'd give me $5,000 for it right there," he said, declining an offer he could not accept without his siblings' approval.
Finally, they brought the coin to the 2003 American Numismatic Association World's Fair of Money in Baltimore, where the four surviving 1913 Liberty nickels were being exhibited. A team of rare coin experts concluded it was the long-missing fifth coin. Each shared a small imperfection under the date. 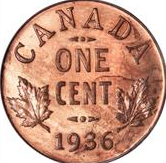 Just weeks after the Canadian penny was pulled out of circulation, the single most famous one-cent coin ever produced in this country — an “exceedingly rare” and valuable 1936 “dot cent” stolen from a U.S. collector in 1964, then mysteriously returned to him — is set to be sold at an American auction this April for at least $250,000.
The penny was one of just three known to have been created by the Royal Canadian Mint at a time when the nation’s coin-makers were scrambling to prevent a shortage of properly stamped coppers.
To distinguish any new batch of coins that might have been required from the earlier production runs of 1936 George V pennies, a tiny dot was added  in the space beneath the “1936” date of the posthumous prototypes, said to have been made in early 1937.
Some experts believe that the potential coin shortage never materialized, so that just three “dot cent” samples were produced, along with limited numbers of similarly marked dimes and quarters. Others suspect thousands of the dimpled pennies were actually minted but later melted down for the first run of George VI one-cent pieces, dated 1937.
Two of the three documented 1936 “dot cent” specimens wound up in the hands of retired Royal Canadian Mint employee Maurice LaFortune of Ottawa. And by the early 1960s, that pair of pennies — as well as the third one, once owned by the widow of another mint employee from Ottawa — had been acquired for a few hundred dollars each by the legendary Rochester, N.Y., coin collector John Jay Pittman.
Before his death in 1996, Pittman would assemble a treasure of numismatic rarities worth $30 million, with the three dotted pennies from Canada among his most prized possessions.
The third of the three — and the one to be sold next month by Texas-based Heritage Auctions at its “World and Ancient Coins” sale in Chicago — has had a particularly intriguing history, having been snatched by thieves from Pittman’s home in 1964 along with a number of other valuable items.
Then, inexplicably, the New York collector received an unsigned envelope containing — along with a few of his other stolen coins — the dotted 1936 penny with a slight scratch on the “3” of the date.
The scheduled sale of the artifact has already created a buzz in North American collecting circles, with the publication Coin World recently celebrating the specimen as a jewel that “combines pedigree, rarity and mystery, and remains a numismatic enigma.”
Even if the penny sells for more than expected, it’s unlikely to surpass the all-time record price for a historic Canadian coin. A 1911 Canadian silver dollar — one of only three known to exist — was sold to a Canadian collector in 2003 for $1.1 million. 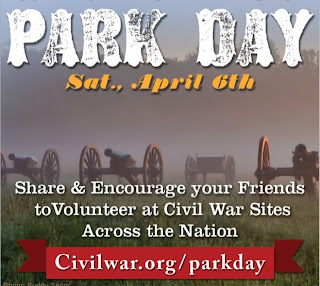