7:2-2.16 Metal detectors
A person shall not use metal detectors or similar devices without a permit issued by Superintendent or designee. The permit may limit the location, hours, and days of use. A permit will not be issued for use in areas of significant historical or other value, or where such use would be incompatible with protection of the resource and/or interfere with public use of the facility. 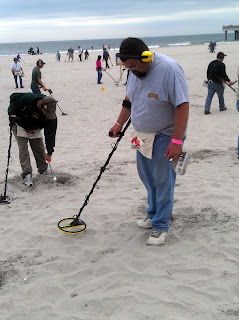 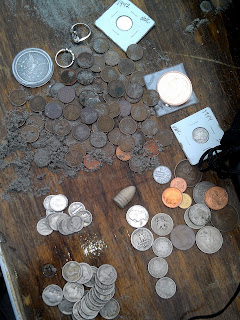 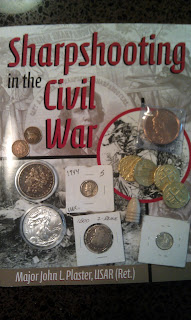 Photo above right and photo at left finds & prizes 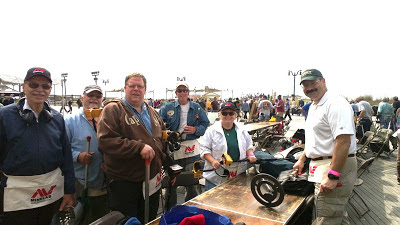 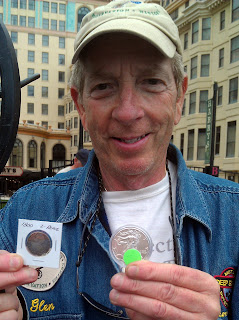 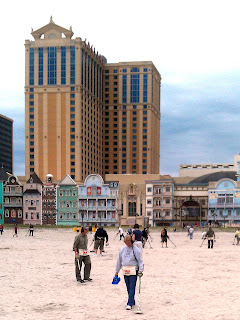 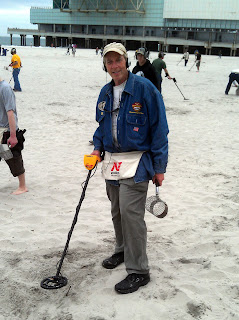 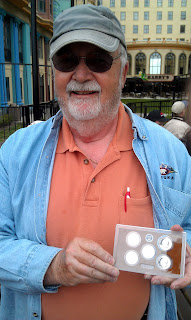 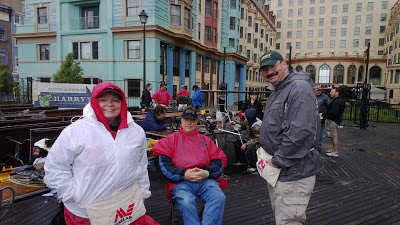 
2013 GO MINELABBING DAY hosted by Goldigger Metal Detectors is scheduled for Saturday May 18th and Sunday May 19th in Atlantic City NJ. Walk on's welcome.
This event is sponsored by MINELAB. 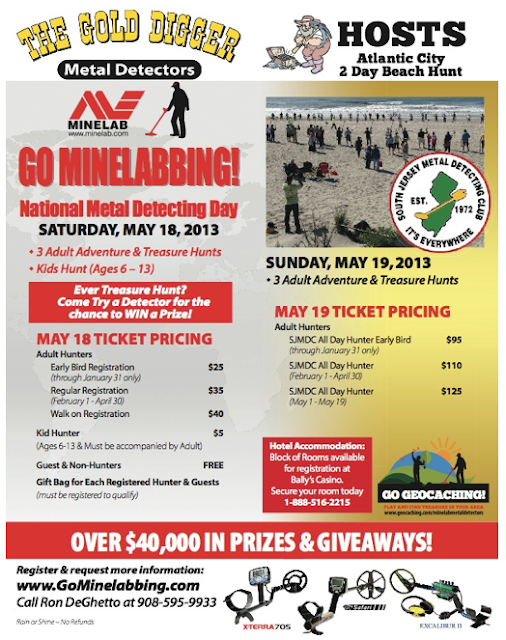 The East Coast Research and Discovery Association 4th annual beach hunt will be held May 18 & 19, 2013 in Ocean City NJ. http://ecrda.net

Ideal for coins, jewelry, relics, and small metals that are difficult to detect; Velox has been developed for tough ground conditions.
You be able to targets at depths that other detectors cannot reach as well as easily searching in high mineralized ground (extremely salty soil, wet beach sand, wet plowed land or highly magnetic ground conditions) which are problematic for most detectors.
Iron switch enables you to eliminate ferrous metals so that when you do not want to detect these type of metals you can search by turning the iron switch off. It also provides ease of use in heavy trash areas.
Velox has easy to understand metal discrimination. It produces a high warning tone for non-ferrous and a low one for ferrous metals.
Boosts the sound of weak signals received from small or deep metals making it easier for you to detect those uncertain targets.
You can search for 25-30 hours with the battery specifically designed for Velox. It offers you the opportunity for an uninterrupted search as well as the great advantage for outdoor use where the means of charging the battery is limited.You can check the battery level by pressing the battery check button and recharge the battery anytime you like.

Check out the Nokta Velox one
http://www.kellycodetectors.com/nokta/
at 3:11 PM No comments: 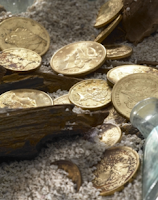 This not to be missed interactive, multi-media exhibit contains more than 500 artifacts from deep-ocean expeditions around the globe and brings the most amazing deep-sea discoveries at New York City's Discovery Times Square beginning May 24.
Odyssey's unparalleled deep-sea archaeological and technological capabilities, offers visitors a unique look into the depths of the ocean through a mix of actual historical artifacts and hands-on, interactive computer games and exhibits.
SHIPWRECK! Pirates & Treasure also offers guests the chance to put their investigative skills to the test by virtually piloting a submersible over the SS Republic wreck site looking for archaeological clues.  An operable model of Odyssey's Remotely Operated Vehicle ZEUS' robotic arm in the exhibit allows guests to try their hand at recovering gold coins. Brave guests can step inside the Hurricane Simulator and experience the high-powered winds that have sunk thousands of ships throughout history. This exhibit is ideal for visitors of all ages, bringing history to life by uncovering priceless knowledge from the depths of the sea.
Discovery Times Square is open seven days a week and is located at 226 W 44th St New York, NY 10036. Tickets are available for $14.50 (child 4-12), $19.50 (adult) and $16.50 (senior = 65).  Special savings for groups of 10 or more are available with advanced reservation.  Once open, the last tickets are sold 90 minutes prior to closing. For individual tickets and venue hours, visithttp://www.discoverytsx.com/exhibitions/shipwreck, call 866.9.TSXNYC (866-987-9692) or visit the Discovery Times Square box office.
Odyssey Marine Exploration, Inc. is engaged in deep-ocean exploration using innovative methods and state-of-the-art technology for historic shipwreck projects, modern commodity shipwrecks and mineral exploration. Odyssey offers various ways to share in the excitement of deep-ocean exploration by making shipwreck treasures and artifacts available to the general public, students, and collectors through its webstore, exhibits, books, television, merchandise, educational programs and virtual museum located atwww.OdysseysVirtualMuseum.com.
Source: The Sacramento Bee Photo: PR Newswire 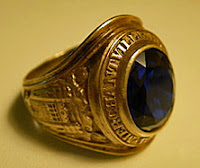 When Dan Knight found a gold Class-of-1963 ring from Merchantville High School in the drained bed of a lake in Medford NJ, he had a choice to make.
Pawn it for the precious metal, or track down the owner?
For Knight, it wasn’t a choice at all.
“We have a code of ethics in the metal detecting community, and when we find something like that, we try to find the owner,” said Knight, an officer in the South Jersey Metal Detecting Club. “I’ve returned maybe about a dozen rings like this, but never something that was this old.”
It was April 6 when Knight and a friend and fellow metal detector enthusiast, Dave Tucker, came across a pair of class rings in the muddy bed of the lake on the grounds of Fellowship Alliance Chapel, which decades ago was the site of a former YMCA day camp in Medford.
Knight, a Voorhees resident who grew up in West Deptford, took responsibility for the 1963 Merchantville ring. With the only clue being the initials “V.H.C.” etched onto the ring, the search was on.
Only one problem: Merchantville High School doesn’t exist anymore, and there was no alumni association to consult for help.
“Luckily, someone scanned pages of the 1962 yearbook, and I found the only V.H.C. in the school — Vernon H. Collins,” said Knight. “It said he was a four-year swimmer, so it all fit with finding the ring in a lake.”
A quick Internet search for “Vernon H. Collins” presented Knight with his next hurdle: An obituary.
“I thought, ‘Oh no, he died,’” said Knight. “But then I looked at the age and it didn’t match up. It then occurred to me that I was looking at his father’s obit.”
It turned out the Vernon H. Collins who lost the class ring is the second in his family to carry that name. The obituary named him and his wife, Paulette, and his mother, Helen, as survivors.
Again, Knight consulted the Internet.
“I couldn’t find any Yellowpage listing for Vernon and Paulette around here, but something popped up in Arkansas,” he said. “So, I decided to call.
“There was no answer, and the answering machine message didn’t have any of their names in it, but I left a message anyway.”
He heard nothing back for a week.
Knight had actually forgotten about the search when he received a call on his cell phone while playing a round of golf.
“It was Vernon,” he said. “It turns out he was away on a trip, and when I told him I had something that may belong to him, the first thing he says is ‘It wouldn’t be my class ring would it?’”
The reason Collins could return Knight’s call for a week?
He was visiting his mother — in Merchantville.
Back in Arkansas, Collins will have to wait until his mother can take custody of the ring and mail it to him to finally see it again.
Knight said he’s meeting with her this weekend.
“I was either 18 or 19 when I lost it at the lake, while swimming,” said Collins, now 58, over the phone from his home in Russellville, Ark. “I was a camp counselor at the YMCA camp there, and I looked all around for it. My dad even came back to the lake and looked for it.”
Collins left to go to college in Arkansas after that summer. He returned for a brief time the next summer, but he eventually settled in Arkansas and never returned to the lake.
“I hated to lose it,” he said. “I mean, I didn’t lose sleep over it — I got a college ring, and moved away, but my mom always the whole time said that I would get it back at some point.”
Collins said it still seems impossible to him that Knight was able to track him down.
“It’s been 50 years,” he exclaimed.
Kudos to Dan Knight for going out of his way to return this lost ring!
To find out what happened to the other ring go to:
http://www.nj.com/camden/index.ssf/2013/05/voorhees_man_finds_1963_class.html

The Spring issue of the Garrett Searcher newsletter is now available.
See all the great finds from readers. 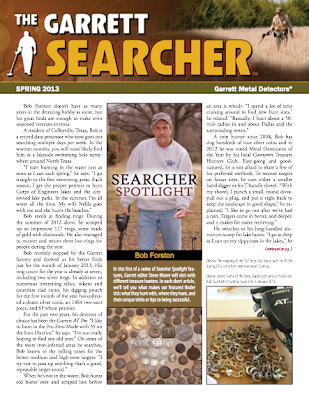