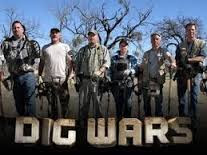 The American Anthropological Association has written to the Travel Channel objecting to and asking for changes in the TV show "Dig Wars," in which contestants are sent to various locations with metal detectors to see if they can locate and dig up antiquities. The material they dig up is called "loot," and is evaluated for its financial value.
"Reasonable viewers watching this program may be mistakenly led to believe that such behaviors are ethically acceptable," says the letter. "On the contrary, the looting as portrayed in the show is deeply disturbing. The overall message is that this nation's cultural and historical heritage is 'loot' that is up for grabs for anyone with a metal detector and shovel. This is the wrong message to give the public, especially in an age when so many historical sites are disappearing." The association offered to identify trained archaeologists who could help the network "communicate the excitement of discovery and of history in a more responsible, ethical and engaging manner."
A spokeswoman for the Travel Channel said via e-mail that no laws are broken. She said that the competition takes place with the full permission of the owners of the land where digging take place. Further, she said that items that are excavated are either returned to the land owners or given to local museums, and she said that the channel believes that "metal detecting enthusiasts should always abide by state and federal laws." She added: "We respect the numerous opinions as it relates to the gathering and  preservation of artifacts. We welcome the dialogue, and hope that Travel Channel's programming will continue to inspire viewers to travel to new destinations to discover each location's unique history."