First Curved Coin to be Released by U.S. Mint 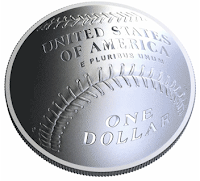 This is real neat and sure to sell out fast !