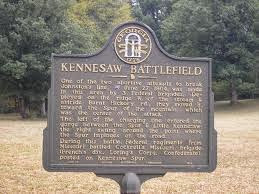 Ahh...a government shutdown let's go digging in the park!
Apparently a Georgia man thought, if there was ever a good time to look for Civil War artifacts at Kennesaw Mountain, a partial government shutdown would be perfect.
He was wrong.
Rangers are still on the job at national battlefield on Cheatham Hill Road. They caught the man taking his metal detector to the park and digging up artifacts.
A Cobb County, GA police officer spotted the man heading into one of the most “archeological sensitive areas of the park,” said Park Ranger Anthony Winegar.
Rangers waited until the man returned to his car with his goodies.
The suspect is facing several federal charges.
Warnings are up in several spots around the battlefield to warn people that digging for artifacts is illegal.  This area is where the main union assault of the Kennesaw Mountain campaign took place.
Rangers say stealing the items is like stealing from history.
“A particular bullet fired from particular style of gun can tell us where the round was fired from and what types of equipment of the lines was issues,” said Winegar. “That’s very valuable for historians for recreating the battle later on.”
Normally, an archaeologist would be called in to check out the area where the suspect found the items, but because of the shutdown, that is on hold.
Source: cox media
http://m.wsbradio.com/news/news/man-arrested-digging-civil-war-artifacts-kennesaw-/nbKmZ/#sthash.urKNiw9h.dpuf
at 6:14 PM