Looks like a great tool for making clean-cut ground plugs. It probably can tear right through thick roots with its doubled-serrated edge. 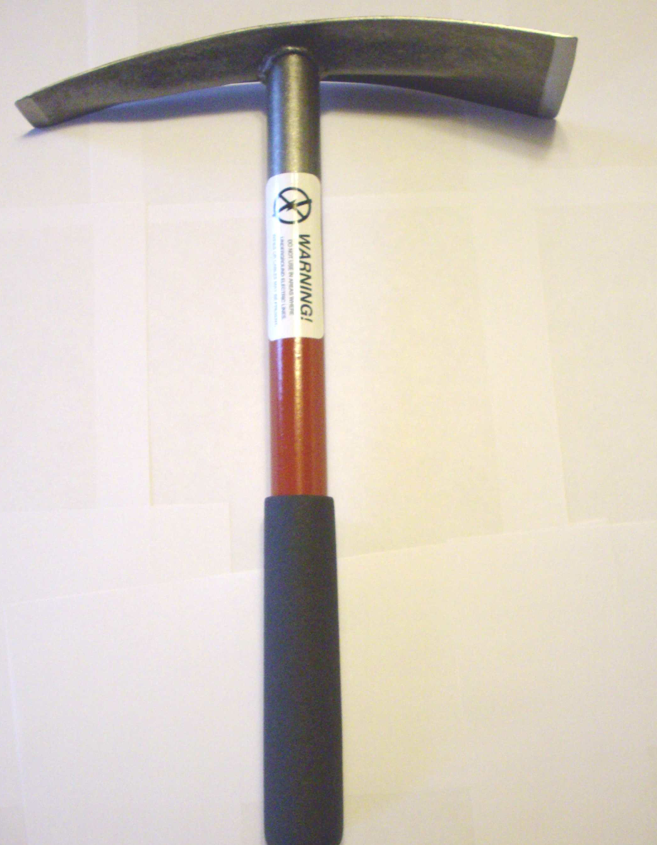 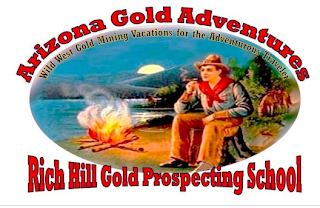 Arizona Gold Adventures Inc  has expanded its gold prospecting school by partnering with Arizona Outback LLC, to instruct clients wishing to learn how to metal detect for gold nuggets. Arizona Outback is one of the nation's leading suppliers of metal detector technology and has served the gold prospecting and treasure hunting community since 1998. Arizona Outback metal detecting instructors travel the world using the metal detecting technology they train with, and are accredited Minelab Metal Detector experts.
For more information on Arizona Outback LLC, located in Prescott Valley, Arizona, call Chris Gholson at 928-777-0267 or, visit them at http://www.ArizonaOutback.com. About Arizona Gold Adventures Inc.Arizona Gold Adventures Inc. headquartered in White Plains, NY, is the leading provider of guided, fully equipped and outfitted instructional gold prospecting day trips and vacations in the state of Arizona. Call Terry Soloman at 914-589-3985 for more information or visit us at: http://www.ArizonaGoldAdventures.com. 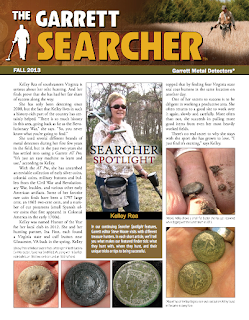 A young Romanian searcher using a Garrett EuroACE found 47,000 silver Turkish coins from 1421–1451 AD. Discovered in September 2013, this silver hoard is the largest ever found in Romania. 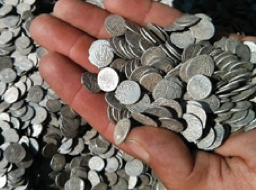 Our Holiday Party organizer in chief - Donna Funk is reminding club members to let her know what food they will be bringing to our party on Monday December 16th.


So far, we have a lot of members bringing desserts (mostly cookies), ziti, meatballs, Swedish meatballs, pizza, coffee and a large sub sandwich.
Some ideas of what you can bring are salads (potato, macaroni, etc), soda, fruit salad or fruit platter, cheese platter, shrimp cocktail ring, kielbasy & cupcakes.
PLEASE email her as soon as possible. dmfunk@optimum.net 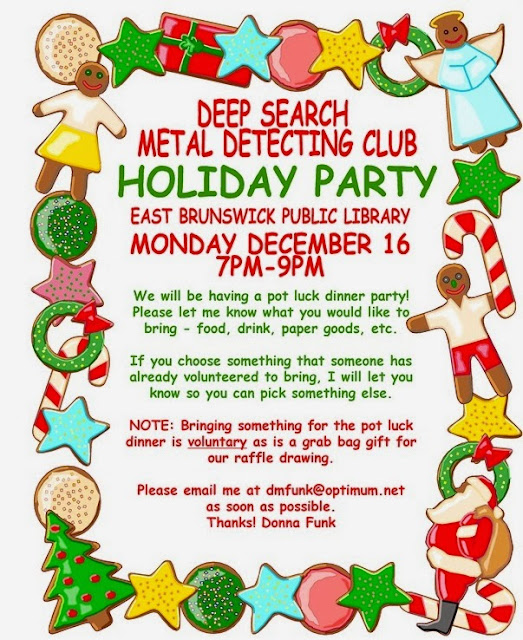 http://metaldetectingforum.com/index.php
at 5:23 PM No comments:

The Brits Are Finding All The Good Stuff

We all know that Britain has a log storied past. The Romans invaded in 43 AD and stayed until about 409 AD, during that time London was called Londinium.
It is not unusual to run across stories of a metal detectorist's finding some important historical artifacts in the local countryside. 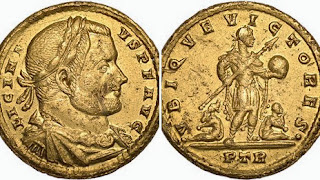 This gold coin was found in a field and is expected to sell at auction for about $50,000
Found by a metal detecting enthusiast, the coin dates from the reign of Emperor Licinius I. One of only four known examples, the coin was struck for the emperor in AD 313 to distribute at special occasions.
The enthusiast, who wants  to remain anonymous, thought it was aluminum foil when he first pulled it out of the mud. On the day it was discovered, the enthusiast said he was heading to a dig organized by his metal detecting club in South Wiltshire in the UK. He arrived late late and he missed the club meeting, rather than waste the day he decided to stop at another site in the county on his way home.
After an hour and a half of trudging through rain and mud, he headed back to his car. He had not had a single signal for about 15 minutes when he got a slight response, one that any detectorist will tell you is probably not worth digging. However having had so very few signals for a while, he decided to dig it up anyway.                                                                     Six inches down he dug out a chunk of earth and sticking out of the side was the unmistakable glint of gold.  Just 0.8in in diameter and weighing 0.2 ounces, it bears the head of Licinius I on one side and depicts him standing between two captives holding a spear on the other.  Above is the triumphant slogan 'ubique victores' - 'everywhere victories'.
The three other known examples of this type are in The British Museum, the Hunterian Museum in Glasgow and the Ashmolean Museum in Oxford.
Source: BBC News

World War II changed everything in American society from 1941–1945. Changes in coinage also led to errors by the United States Mint — and some of these so-called “error cents” can be worth thousands or even millions of dollars!
These errors resulted from the change in metals during the war when the U.S. Mint had to divert much of the copper used to strike cents to the wartime production of weapons and ammunition. In 1943, the composition of the cent was changed from 95 percent copper, 5 percent zinc to zinc-coated steel. Near the end of the war in 1944, the mint returned to the former copper alloy.
In mint facilities, the transition from copper to steel and then back to copper didn’t go so smoothly. Sometimes, pre-1943 bronze planchets*  were struck with dies for the 1943 cents, which created copper-alloy strikes instead of zinc-coated cents. Then, in 1944, some of the 1943 zinc-coated steel blanks made it into the production facilities, leading to zinc-coated steel 1944 strikes instead of copper-alloy cents.
The mistakes were usually discovered pretty quickly, so these wartime error cents are in short supply —, the rarest ones are some of the most valuable American coins produced in the 20th century. The highest recorded price paid for an off-metal 1943 or 1944 cent was $1.7 million for the only known bronze 1943-D cent.
At a recent Heritage Auction in New York, several of these wartime cents went under the gavel. One of the highlights was a bronze 1943 Lincoln cent produced at the Philadelphia Mint that sold for $88,125. In addition, several other important off-metal errors sold for big bucks, including a bronze 1943-S cent that went for $141,000, and zinc-coated steel 1944 and 1944-D cents, which sold for $30,550 each. Pretty nice prices for a coin whose face value is only one cent!
*Definition: A planchet is a prepared disc-shaped metal blank onto which the devices of a coin image are struck or pressed. The metal disc is called a blank until the time it passes through the upsetting machinewhich causes the rim to be raised. Once it has a rim, the disc is called a planchet.
Source: kirotv.com
at 11:54 AM No comments:

Storing Your Metal Detector For The Winter

At this time of year us poor unfortunate folk here in the East do not have the advantage of warm temperatures, so we eventually have to pack up our equipment for the long cold winter ahead. 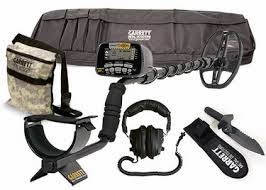 Before your metal detector away, be sure to remove the batteries from your detector and pin pointer as well. It would also be a good idea to clean any dirt and dust on your detector, coil, shovels and pin pointer.
If you have a water metal detector that you use in the ocean, wash off your equipment with fresh water, this includes scoops. Remember salt water can be very corrosive and could damage your equipment. Do not store your detector in a cold damp basement or garage.
Some people store them in the original box it came and I have also heard of some putting their detectors away in a gun style padded case which is a good idea.  Tractor Supply Co. has 52 inch long rifle cases for about $15.
Many of us spend more time on our computers during the winter months. This is an excellent time to do some online research about local sites for tips for the Spring. You may also want to check your local library or historical society.
at 6:06 PM No comments: