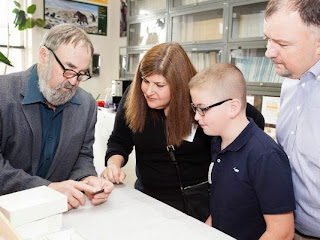 The ancient projectile point found this summer by a Virginia boy vacationing at the Jersey Shore has found a new home at the Smithsonian.
Noah Cordle, 10, and his parents, Brian and Andrea Cordle, donated the artifact to the National Museum of Natural History in Washington, where it will become part of the Smithsonian Institution's research collection.
Noah found the artifact, called a Clovis point, on Long Beach Island in August. Noah was vacationing with his family when the point clunked him in the leg at the water's edge in Beach Haven.
"It is great for us," said Dennis Stanford, curator of archaeology at the national museum, "because it is the first Clovis point we've received from New Jersey."
The family originally planned to donate the projectile point to a museum in New Jersey.
"I think that with all that we learned, this was the right thing to do," Brian Cordle said. "The Smithsonian is so much closer to us, and after talking to people there about all the work they do with Clovis points, it felt right to us."
Smithsonian archaeologists were duly impressed by Noah's discovery, backing up an assessment by Greg Lattanzi at the New Jersey State Museum in Trenton.
Lattanzi, assistant curator of the museum's archaeology and ethnography bureau and president of the Archaeological Society of New Jersey, determined Noah found a well-preserved Paleoindian point, between 8,000 and 11,000 years old.
http://www.thedailyjournal.com/story/news/local/new-jersey/2014/11/06/boys-beach-discovery-ends-smithsonian/18581297/
at 6:10 PM