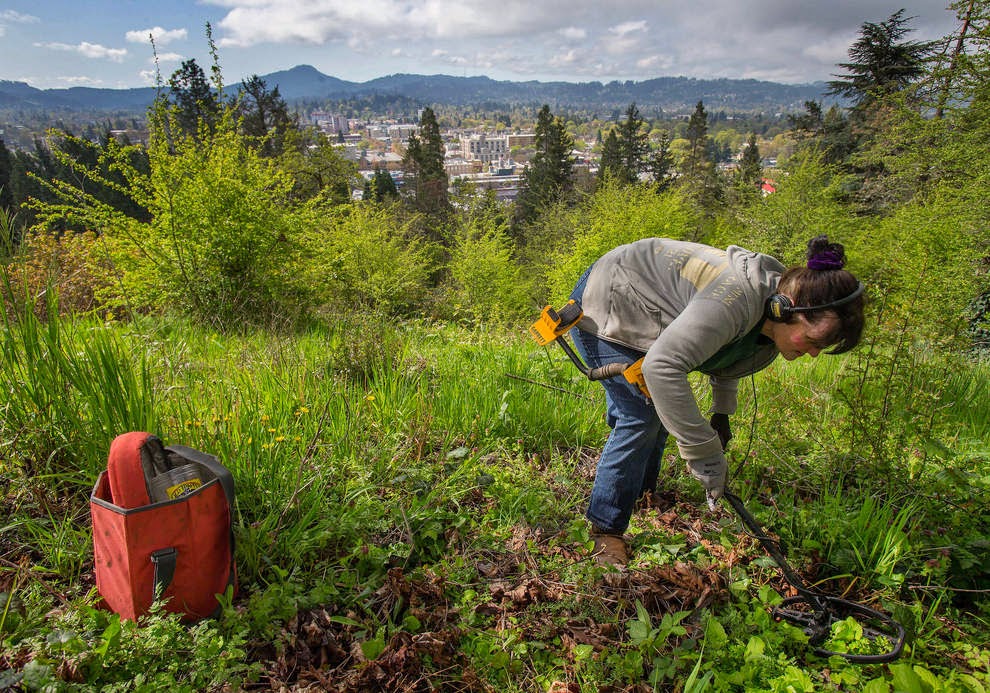 An 1898 Indian Head penny. A pinback button from the Loyal Legion of Loggers and Lumbermen, circa 1917. A student’s 1987-88 Churchill High School ID card.
Those are just some of the hundreds, maybe thousands, of things Janet Roberts has unearthed with her metal detector during the past year or so. “It’s amazing what you can find out there,” says Roberts, 58.

Amazing, also, when you consider that Roberts is legally blind, so the coins, cellphones, pet tags, bullets, railroad spikes, jewelry, keys and everything else is just a blur before she examines them with a magnifying glass.
“I have no central vision at all,” says Roberts, a part-time orderly and certified nursing assistant at Springfield’s Sacred Heart Medical Center at RiverBend. “I look at a face and everything’s gone, except the sides.”
Roberts, who has 20/400 vision, says she was 33 when her eyes hemorrhaged, an episode brought on by a condition known as cone dystrophy, an inherited ocular disorder characterized by the loss of cone cells, the eyes’ photoreceptors responsible for both central and color vision.
“It will never get better,” Roberts says. “It’s like I’m blind as a bat. I’ve just learned to adapt with it and do the things that I like to do.”
And there is nothing she likes to do more than take the $350 Garrett Graphic Design ID metal detector that her husband, David Roberts, bought her and spend four to six hours a few days a week on and around the 682-foot butte that sits in the middle of Eugene.
“She found a nice turquoise ring, and it fit pretty good,” David Roberts says, gazing down at his wife working in the muddy grass below the parking lot atop the butte.
“I told her it was a good trade for the metal detector,” he adds with a grin.
Source: THE REGISTER-GUARD EUGENE, OR