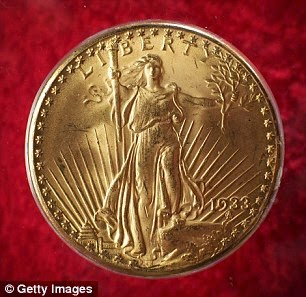 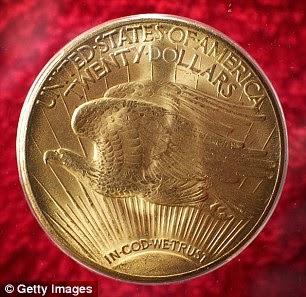 A family was awarded the rights to 10 rare gold coins possibly worth $80 million or more  after a US appeals court overturned a jury verdict.

US Department of the Treasury officials insist the $20 Double Eagles were stolen from the US Mint in Philadelphia before the 1933 series was melted down when the country went off the gold standard.
They argued that Joan Langbord and her sons cannot lawfully own the coins, which she said she found in a family bank deposit box in 2003.
Langbord's father, jeweler Israel Switt, had dealings with the Mint in the 1930s and was twice investigated over his coin holdings. A jury in 2012 sided with the government.
However, the appeals court returned the coins to the Langbords because US officials had not responded within a 90-day limit to the family's seized-property claim, filed in about 2004.
Family lawyer Barry Berke said: 'Congress clearly intended for there to be limits on the government's ability to seek forfeiture of citizens' property, and today's ruling reaffirms that those limits are real and won't be excused when the government violates them.'
Her sons, entertainment lawyer Roy Langbord, of New York City, and David Langbord, of Virginia Beach, Virginia, joined her in the legal fight.
The Mint struck nearly a half-million of the Double Eagles in Philadelphia in 1933 but never released them after President Franklin D. Roosevelt abandoned the gold standard and prohibited using the gold coins as currency.
The money makers in Philadelphia sent all of their gold coins to be melted in 1937. The Mint sent a pair of 1933 Double Eagles to the Smithsonian Institution for its US coin collection.