Surprise! Any Buried Treasure You Find Is Taxable 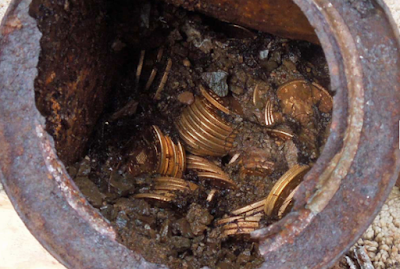 In February 2013, a northern California couple were walking their dog on their rural property when they discovered six cans filled with 19th-century gold coins. The coins, which are being sold by Kagin’s Inc. of Tiburon, Calif. may be worth up to $10 million. The couple has wisely chosen to stay anonymous, but they won’t be able to hide their good fortune from the IRS. Found property that was lost or abandoned is taxable at its fair market value in the first year it’s your undisputed possession, the IRS says. That means the couple will have to pay federal taxes of 39.6% on their windfall, plus California state tax of up to 13.3%.
The precedent for the IRS’s “treasure trove” rule dates back to 1964, a couple discovered $4,467 in a used piano they had purchased for $15. The IRS said the couple owed income taxes on the money, and a U.S. District Court agreed.
And if that were not enough
“Income from illegal activities, such as money from dealing illegal drugs, must be included in your income on Form 1040,” the IRS says. Bribes are also taxable, the IRS says.  ???