SET YOUR DETECTOR TO 'ALL GLASS' MODE! 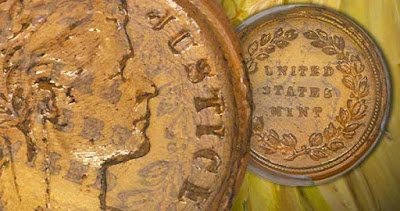 IN an attempt to find a possible alternative to copper during World War II the U.S. experimented will all-glass pennies.

Recently the only known surviving intact all-glass penny sold for an astounding $70,500 in a public auction held in Fort Lauderdale FL.


A war between a phone bidder and a floor bidder pushed the cent's selling price to more than double its $30,000 USD expected value. The rare penny finally was won by an American collector bidding on the phone.
"This one-of-a-kind cent is a part of U.S. history," said Mark Borckardt, Senior Numismatist at Heritage Auctions. "Collectors love to own unusual specimens, and although glass failed as a substitute for U.S. coinage, this piece represents a unique artifact of the ingenuity and determination of U.S. Mint officials and private industry."
Made of tempered, yellow-amber transparent glass by the Blue Ridge Glass Company of Kingsport, Tennessee, the example offered in the auction is the only surviving example of two known to exist. The other example is broken in half.
After considering various alternatives, such as plastic and even rubber, the U.S. Mint eventually struck cents made of zinc-coated steel in 1943. By the time the glass cent tests were completed in December 1942, it was too late for the U.S. Mint to consider it as a viable replacement for the penny.
at 2:26 PM