Could be gold in them thar hills in Pennsylvania 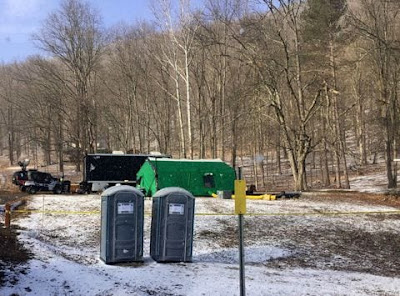 FBI agents and representatives of the Pennsylvania Department of Conservation and Natural Resources set up a base in Elk County, Pa., at a site where treasure hunters say Civil War-era gold is buried. (Katie Weidenboerner/The Courier-Express/AP)

As a 155-year-old legend goes, a Union Army wagon train left Wheeling, W.Va., before the Battle of Gettysburg, carrying two tons of gold, but never completed its 400-mile mission.
The gold was supposed to be used to pay Union soldiers. But it first had to make it to the U.S. Mint in Philadelphia. It never did.
The wagon train traveled northeast and was last spotted in St. Marys, Pa. Searchers found the wagons and the bodies of dead soldiers — and the gold was gone.
But maybe not forever.
On Friday March 16th, dozens of FBI agents, Pennsylvania state officials and members of a treasure-hunting group were buzzing around the state forest at Dents Run, about 27 miles by road southeast of St. Marys and 135 miles northeast of Pittsburgh. It’s the site where the treasure-hunting group, Finders Keepers, says as much as $55 million in lost Union gold could be buried.
In 2012, Finders Keepers members said they’d found the location of the gold using powerful metal detectors and uncovered proof that soldiers had camped there. But there were two problems. First, the site is on state land, where it is illegal to dig without permission and permits. Second, they didn’t find any gold, which would have gone a long way toward getting permission from the Pennsylvania Department of Conservation and Natural Resources.
“We found a bullet shell, knifes, animal traps, zinc Mason jar lid, tin cans, bones (human or animal), whiskey bottle, camp fire pit, and a lot more that the state now has and won’t return,” a statement on the Finders Keepers website said. The government says “they [don’t] have the time or the money to go treasure hunting, but if we can show them the gold then they will look into it. They [also] stated that if anyone digs on state land and remove artifacts they would go to jail and lose any rights to a reward.”
A memo purportedly from the government posted on the group’s website corroborated that statement. It prohibited Parada’s group from actually digging on the state property, but it said he could continue doing “surface surveys and searches as a hobby activity,” provided he accepted the liability if he got hurt.

But this week, AP reported that Finders Keepers was on-site, along with members of the state agency. They had set up camp on the snowy ground — a green tent and a trailer, along with a satellite truck and two port-a-potties.
But they were keeping mum about what they were doing.
It’s also unclear what changed or whether the government received some information that would corroborate Finders Keepers’ claims.
In a statement, Kem Parada told The Washington Post: “I’m sorry but as of right now all we’re allowed to say is ‘No Comment.’ We’ll keep you in mind when/if anything changes.”
An FBI spokeswoman told the AP only that agents were conducting court-approved law enforcement activity at the site.
Even if they find the gold, exactly how it got there will probably remain a mystery.
Of course, there are myriad stories about gold being lost in the chaos of war — and just as many theories about where all that gold may be.
For example, in April 1865, in the waning days of the war, when Confederate President Jefferson Davis and other government officials fled the capital in Richmond, they toted the monetary reserves of the rebel government with them, much of it in gold.
They were rumored to be carrying millions, according to History.com. But when Union troops captured Davis and his traveling party, they had just a few Confederate dollars on them.
What happened to the gold remains a mystery. Maybe the Michigan cavalrymen who captured Davis stole it. Another legend says Davis and his group hid it.
No one knows for sure, but many, many people have ideas, William Rawlings, author of several nonfiction books about Southern history, told the site.
“People like to believe there’s something out there,” Rawlings said. “They left Richmond with a bunch of money, and when [Davis’s group] was captured six weeks later, they didn’t have it. The question is, what happened? And people’s imaginations take over from there.”

The Finders Keepers group has been involved in searching in Nova Scotia near Oak Island
http://finderskeepersusa.com/site.php?site=9