The National Park Service announced that archaeologists have found the "limb pit" where the two soldiers and the amputated arms and legs were buried.
The discovery, on the battlefield just north of Manassas, Virginia, is extraordinary, experts said. 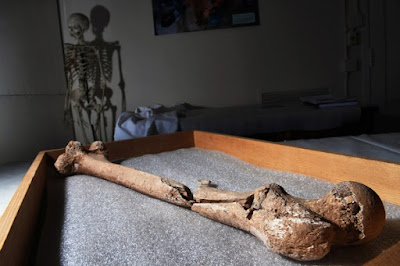 A femur with a bullet was among the limbs found at the Civil War burial pit.
Washington Post photo by Matt McClain

The bullet probably hit the Union soldier as he was fleeing. It may have struck his cartridge box first, which sent it tumbling through the muscle of his right buttock, broke his right leg and buried itself sideways in his thigh bone just below the hip.
His buddies probably carried him as they retreated before the storm of Rebel gun and cannon fire. At the field hospital, the harried surgeons probably took a look at him and moved on to those less seriously wounded.
After he died, he was laid in a shallow pit with a dead comrade and the sawed-off arms and legs of as many as 11 more soldiers cut down at the Civil War's Second Battle of Bull Run, in August 1862.
The two soldiers - referred to as Burial 1, with the embedded bullet, and Burial 2 - were placed side by side in the pit. The severed limbs were carefully arranged next to them, like broken tree branches, according to a photograph from the dig.
Burial 1 probably went in first, because Burial 2 was partially on top of him.
The hole was about a foot deep, and over the years farm plows had carried off the skull of one man and part of the skull of the other.
Anthropologists from the Smithsonian Institution have studied the injuries suffered by the two soldiers and examined the cut marks on the severed limbs made by the surgeons' saws. There were nine severed legs and two arms in all.
The identities of the soldiers are not known, and their fates were probably a mystery for their families, painful and enduring.
But scientific tests and circumstantial evidence show they were probably Northerners.
The bullet in the leg of Burial 1 was fired from an imported British Enfield rifle musket then commonly used by Confederates, said Bies, now the superintendent of the Manassas National Battlefield Park.
The Burial 1 soldier, who was probably in his 20s, stood about 5 feet 7 inches tall. No clothing was found with him.
The man in Burial 2 was laid to rest in his Union coat - its four eagle-imprinted buttons were found in the pit with him.
He was probably in his 30s, and only about 5-foot-5.
He had been wounded by one large ball that smashed his upper right arm, a smaller one that hit him in the groin and a smaller one that struck near his right shin. Several of the rounds were found in the ground near him.
The Park Service believes the men may have been hit during a doomed Union attack on Aug. 30 against Confederate forces hunkered down in an unfinished railroad cut at the top of a ridge.
"It's so rare that you have a discovery like this," said Smithsonian anthropologist Kari Bruwelheide. "You have a burial feature that speaks in so many ways to the events of a battle, but also to the . . . people participating in treating the wounded."