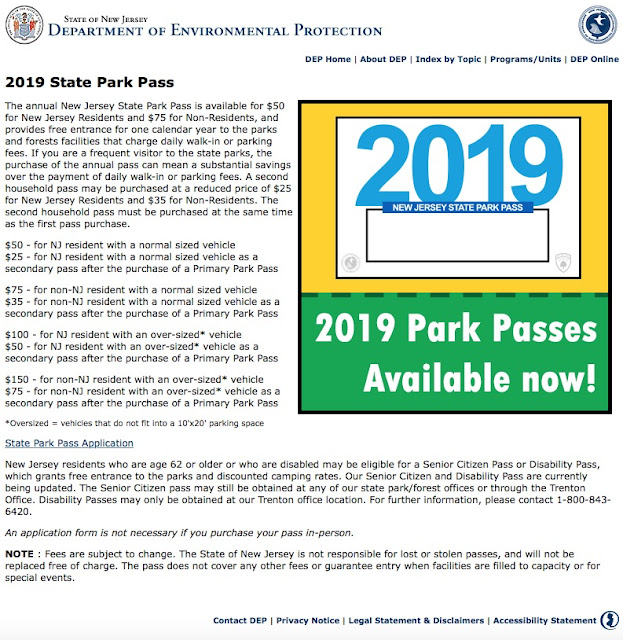 Rare gold coins and a golden earring have been discovered in the ancient Mediterranean port of Caesarea in northern Israel - possibly left and never recovered as Crusaders conquered the city 900 years ago. 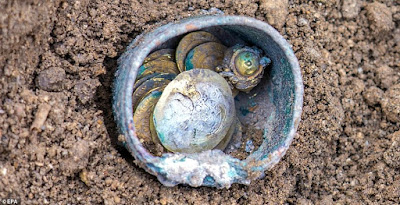 The Israel Antiquities Authority announced finding the 24 gold coins and the earring. According to the authority, it was found between two stones in the side of a well in a house in a neighborhood that dates back some 900 years, during the Abbasid and Fatimid periods.
The directors of the excavation, the IAA's Peter Gendelman and Mohammed Hatar, said the coins in the cache date to the end of the 11th century. That makes it possible 'to link the treasure to the Crusader conquest of the city in the year 1101, one of the most dramatic events in the medieval history of the city', an IAA statement said.
The crusade which captured Caesarea was led by Baldwin I of Jerusalem, who ruled the Crusader kingdom between 1100 and 1118.
It followed the First Crusade and is often known as the Crusade of the Faint-Hearted due to the number of people who joined it having turned back from the First Crusade.
After being crowned in Jerusalem on 25 December 1100, Baldwin fought several battles between Jerusalem and the port city of Ashkelon.
Caesarea fell on 17 May 1101 after a siege of 15 days. According to the Antiquities Authority, most inhabitants of the city were massacred by Baldwin I's army between 1100 to 1118 CE.
The bronze pot in which the trove was held for the past millennium, which is itself a valuable item, was secreted between stones in a 1.5 meter-deep well.  The discovery was made during an excavation and conservation project at the Caesarea World Heritage site.
This bronze pot, which shows indications of once having an original metal lid, was given a makeshift ceramic stopper before being placed into the watering hole, according to The Times of Israel. 'The people broke a piece of ceramic and put it in as a stop-gap lid so the coins wouldn't fall out'. 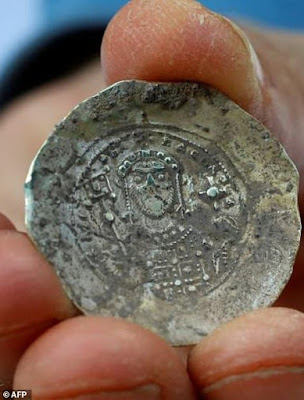 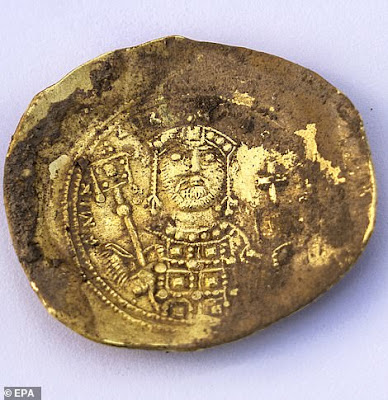 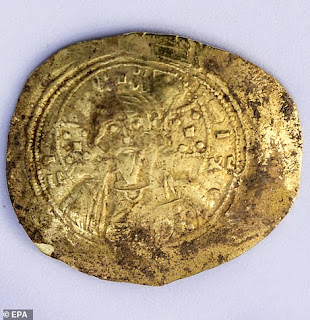 'According to contemporary written sources, most of the inhabitants of Caesarea were massacred by the army of Baldwin I (1100-1118), king of the Crusader Kingdom of Jerusalem,' it added.
'It is reasonable to assume that the treasure´s owner and his family perished in the massacre or were sold into slavery, and therefore were not able to retrieve their gold.'
The cache is of a unique combination of coins not yet seen in Israel consisting of two types of coins: 18 Fatimid dinars, well known from previous excavations in Caesarea, where it was the standard local currency of the time,' said Dr. Robert Kool, coin expert at the authority.
'And a small and extremely rare group of six Byzantine imperial gold coins.
'Five of the coins are concave and belong to the reign of the Byzantine Emperor Michael VII Doukas (1071-1079 CE).'
Caesarea was constructed in the first century BC by King Herod at a time that Judea was part of the Roman empire. First built by Herod the Great between 20 and 11 BC, Caesarea proved an important port city to several conquerers, including the Roman and Byzantine empires.
Source: Daily Mail
at 4:33 PM No comments: