Stunned metal detectorist unearths a 'chocolate coin' - only to discover it is a 1,500-year-old Anglo-Saxon GOLD pendant 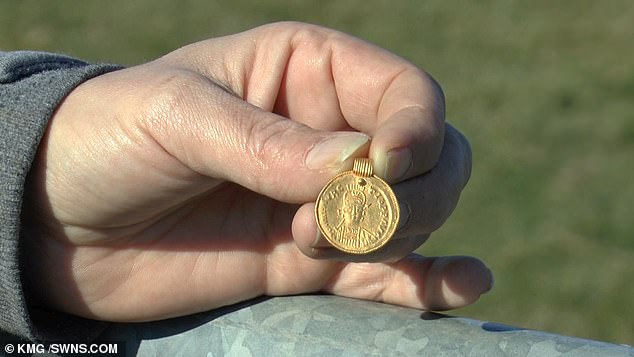 An amateur metal detectorist has compared finding a 6th century Anglo-Saxon pendant in a muddy field to 'winning the lottery'.
The shiny piece of gold was originally mistaken to be a 'chocolate coin' due to its immaculate preservation but experts proved it is a gold pendant from 1,500 years ago.
Rachel Carter, 41, was searching a Kent field with her partner and her metal detector when she stumbled across the find.
After showing the coin to her partner they realized what she had mistook to be a 'piece of junk' was in fact an authentic piece of British history.
The find may now feature in a museum with the name of its discoverer underneath.

Ms Carter said: 'As soon as I put the detector down, I got a signal that was going mad so I dug down and pulled out this pendant.
'It was only about five inches down and was so perfect and gold and new-looking that at first I thought it was a bit of junk - you'd think you could unwrap it and eat the chocolate from inside.
'I went over to Ricky and said 'do you reckon this is anything?' and he was like "oh my God."
Ms Carter and her partner, Ricky Shubert, say it was a sign from her mother who passed away nearly a year before the discovery.
She restarted the hobby after caring for her elderly mother and made the find at Christmas. 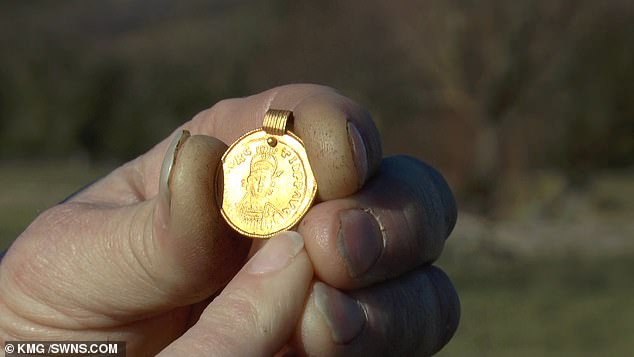 'Some people in my club have been digging for 50 years and they say they've never seen anything like it.'
Using her partner's metal detector, Ms Carter briefly scanned over a section of earth at her friend's farm before setting off to tackle the far side of the field.
But her partner told her she had missed a spot and told her to take another look.
She said: 'Ricky said 'hang on you said you wanted to try this part' and he encouraged me to come back and have another look.
'My mum always said to me "one day you'll find something really special."
'All I ever wanted was to find something gold and religious for her - because she was Catholic - and then I did.
'It's like she sent this as a sign, saying "see? keep going."
'We've been back a few times since then, and haven't found anything.
'Usually you find caps, coins, that sort of thing - but we've found absolutely nothing since. It's really weird.' 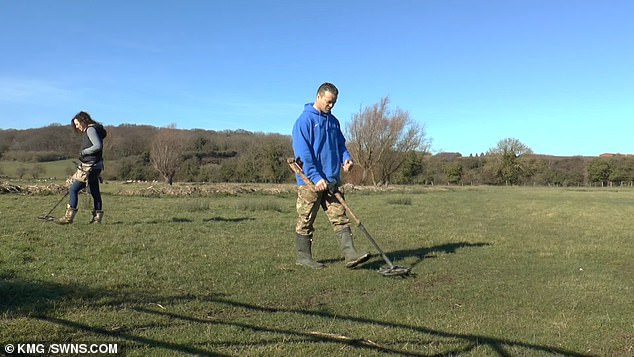 The pendant was reported to a Kent Finds liaison officer and could be displayed in a museum with Rachel's name underneath it.
She said: 'It would be lovely to see it in a museum, with my name underneath it
'But to be honest, I'd rather keep it because it's absolutely amazing - finding it was like winning the lottery, without having known what the ticket was worth.'
The couple hope to find out how the pendant came to be at the farm near Marshside and more about the area's history.
Andrew Richardson, outreach and archives manager at Canterbury Archaeological Trust, said it is a 'significant find.'

He added: 'My first impression is that it is a gold coin of 6th or early 7th century date, possibly an imported Frankish tremissis, that has been re-fashioned as a pendant.
'We have seen these before in Kent. Imports of quantities of Byzantine and Frankish gold coinage into Kent were not infrequent, probably as gifts
'Anglo-Saxon England was not thought to be a coin using economy, so coins tended to either get melted down to make jewelry, or occasionally got refashioned as pendants, as is the case here.
'During the early 7th century, the Kentish kings began to mint their own gold coins, known as thrymsas, and from then on a coin using economy developed.'
He added: 'That stretch of the north Kent coast is certainly an area where there is plenty of evidence of prehistoric, Roman and Anglo-Saxon settlement.
'Coastal erosion here means that considerable archaeology is being revealed along this stretch of shore, and I'd expect this to continue.
'This is a significant find, and the finder has done the right thing by reporting it to the Finds Liaison Officer for Kent.'
at 5:45 PM